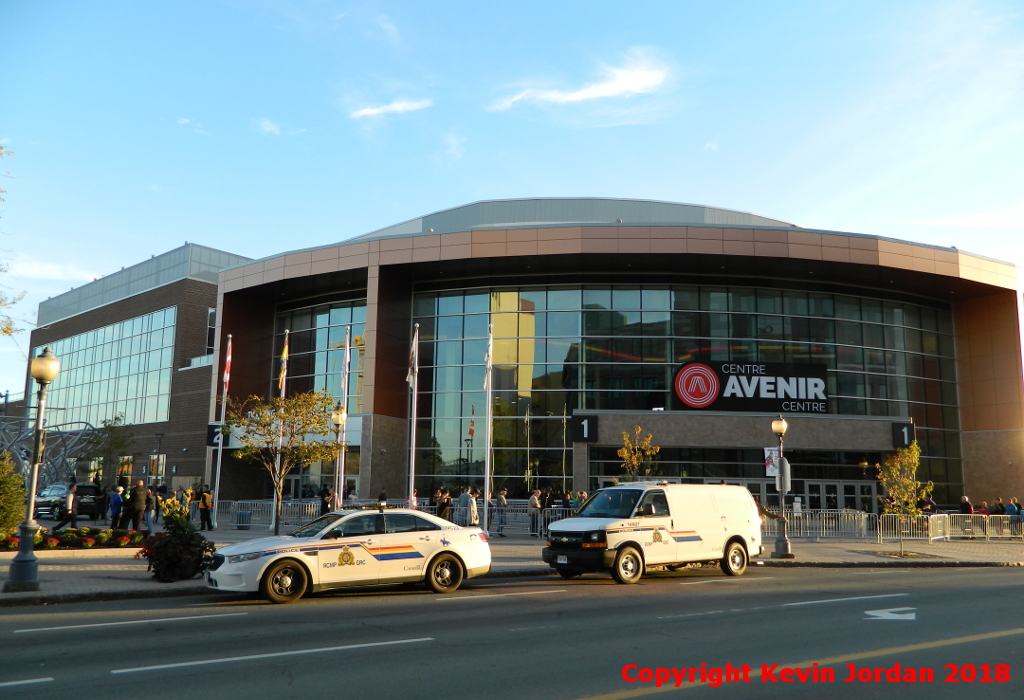 In the 1960's, as Canadian downtowns began to decline as the shopping hubs of their cities and the suburbs began to take over, cities across the country all had similar ideas at the same time. "If you can't beat the suburbs, then why not make the downtown more like them?" Led by Eaton's and by urban developers, in cities across Canada, downtown malls were built in an effort to lure people back downtown. As anyone who ever ventured into a downtown Canadian mall in the 1980's, 1990's or 2000's can attest, it didn't work. Downtowns couldn't beat the suburbs at their own game, and downtown shopping centres, with few exceptions mostly in large cities, became emblematic of urban decay and the triumph of the suburbs.

In Moncton, the downtown shopping centre was called Highfield Square, and was built with the ever-present Eaton's store in the late 1960's, on land formerly occupied by the railway. Four years later, the Moncton Coliseum opened, miles away, on a tract of suburban land surrounded by parking lots, in what remains the city's edge even four and a half decades later.

By the 1990's, urban planning was starting to espouse the idea of making the downtowns a destination for entertainment or culture rather than shopping, in an effort to revitalize decaying centre cities. When people generally wouldn't come downtown anymore for general shopping at a department or clothing store, maybe they would do so for a concert or a hockey game, and maybe on that trip they'd go to a downtown restaurant or bar for a pregame meal or postgame beverage. And so, while the Moncton Coliseum was still in serviceable condition as a hockey arena, the city felt it was missing out on concerts and other events thanks to the Coliseum's low ceiling and poor acoustics. In 2012 Moncton city council decided to tear down Highfield Square and build a new event centre downtown on that plot of land. Just as Moncton followed the conventional wisdom on urban revitalization in the 1960's, the city did the same in the 2010's.

The new arena wasn't conceived as just be a hockey arena, but as the entertainment capital of the Maritimes, an anchor of the region solidifying Moncton's position as Hub City. Moncton is a reasonable drive from all other population centres in New Brunswick, PEI and parts of Nova Scotia, and a big arena would act as a draw to convince big-name touring acts to come out. It might not have been economical to drive eight hours from Quebec or Boston or wherever to play one show in Halifax, but playing back-to-back nights in Halifax and Moncton, drawing people coming in from across the Maritimes to one city or the other for the show, all of a sudden became a possibility.

Highfield Square was a nondescript low-rise brick building. It was a dead mall by the late 2000's, and few tears were shed by the time it was demolished. The new Centre Avenir Centre, by comparison, is a tall, handsome red brick and glass building, set on a diagonal to the city grid and with a large plaza out front. The arena plaza has a concrete pad in front that will be flooded every winter for shinny and public skating.

The ice level at the Avenir Centre is on ground level, so when one enters the building, a grand multi-storey entrance awaits, with stairs and escalators leading up into the seating bowl. At ground level also sits a well-stocked team store and box office, which I found to be a little unusual given that it forces the ticket-takers to be stationed right at the arena doors in order to allow free access to the store during the games. I suspect in winter that this decision will prove unpopular with the locals, as opposed to having free access to the lobby and ticket-taking at the foot of the escalators like most comparable buildings.

The arena concourse at the top of the stairs opens directly into the arena bowl. The Avenir Centre is comparable in size to other large CHL buildings in markets like London, Spokane or Everett, but unlike those buildings that took an NHL arena and shrunk it (lower bowl, suites, upper bowl), the Avenir Centre is all on one level. On three sides it is the size of a full-sized NHL lower bowl, with thirty-odd rows of seats from glass to back wall. The fourth side is smaller, with club seats and press box truncating the seating bowl. In a nice touch, the truncated bowl continues one section over from the end of the press box, so that when one reaches the top of the escalators, you immediately receive the CHL's grandest first look at the seating bowl, with the entire arena opening in front of you. The Wildcats also generally have the temporary "concert seats" in one end of the building kept retracted, with an ice-level bar down on the arena floor. For big games I am told that the seats can be extended as needed to make the bowl go 360 degrees around the ice, but for an average game the team has decided, sensibly, to make better use of the space than a "dress as a red seat" competition.

From a pure facility standpoint, the Avenir Centre might be the best purely junior hockey arena in the CHL. It can't compete with NHL-grade buildings in Edmonton or Quebec City, but from a junior perspective it is close to perfect. The pitch of the seats is steep, and they all have tremendous views of the action. The scoreclock, sound system, lighting, washrooms etc. are all NHL-grade. A single wide concourse surrounds the bowl at mid-level on three sides, opening to a top-down view on the fourth underneath the suite level. Food selection is wide and varied and includes East Coast specialties like donairs. Arena signage, fully bilingual, is clear and easy to understand.

In a general sense, I don't make a habit of going to new arenas early on, because the arena staff tend to be all new, the quirks of the building haven't been figured out yet, and new features are generally still being added throughout the first year. I went to the fourth-ever Wildcats game at the new building only because I was in New Brunswick anyway, and I hope that my minor complaints about the building are resolved over the upcoming season. The Wildcats' banners (and those belonging to the AHL Moncton Hawks previously) were nowhere to be found in the rafters when I visited. I'm told that the Wildcats banners did eventually make the trip over, but the Hawks banners are still nowhere to be seen. The sound system was also a little too loud for my taste, but hopefully that issues will be fixed as the building settles into a routine.

More worryingly for the Avenir Centre is the fact that the fans inside are Wildcats fans. Moncton fans have never had much of a reputation for crowd noise, and while 4,600 people is a perfectly respectable crowd for a QMJHL game, in an 8,800 seat arena the building just feels empty. The Avenir Centre was built as a regional hub arena, as mentioned, and I've no doubt that they can sell out 8,800 seats for a big-name concert or show, but 34 regular season hockey games seems like it might be a big ask. And the atmosphere at a half-empty arena is never particularly fun. At the Wildcats game I went to, organic crowd noise was nonexistent, and even the cheers for goals were drowned out by noise from the loudspeakers or lost in the rafters. Live hockey needs organic passion and culture in order to be entertaining, and the Avenir Centre experience, at least in early October 2018, is sterile.

Moncton's downtown is in good shape right now, with bars and restaurants lining Main Street, and the new arena is a perfect addition to the streetscape. With a new Hyatt hotel under construction across the street, the number of people downtown is only going to continue to increase, as the Avenir Centre anchors future urban development, just like all the planning eggheads said it would. Trading Highfield Square for Avenir Centre is a great trade for the city. The building itself is a spectacular junior hockey facility, one of the best in Canada. I have no doubt that when it's full of people, it would be a great place to watch a game, concert, or monster truck show. I'd be interested to come back in a few years and see what's changed, but for now, it feels a little like a disused palace; full of luxury but absent of soul. One hopes that the Wildcats can make it feel more homey in the coming years. 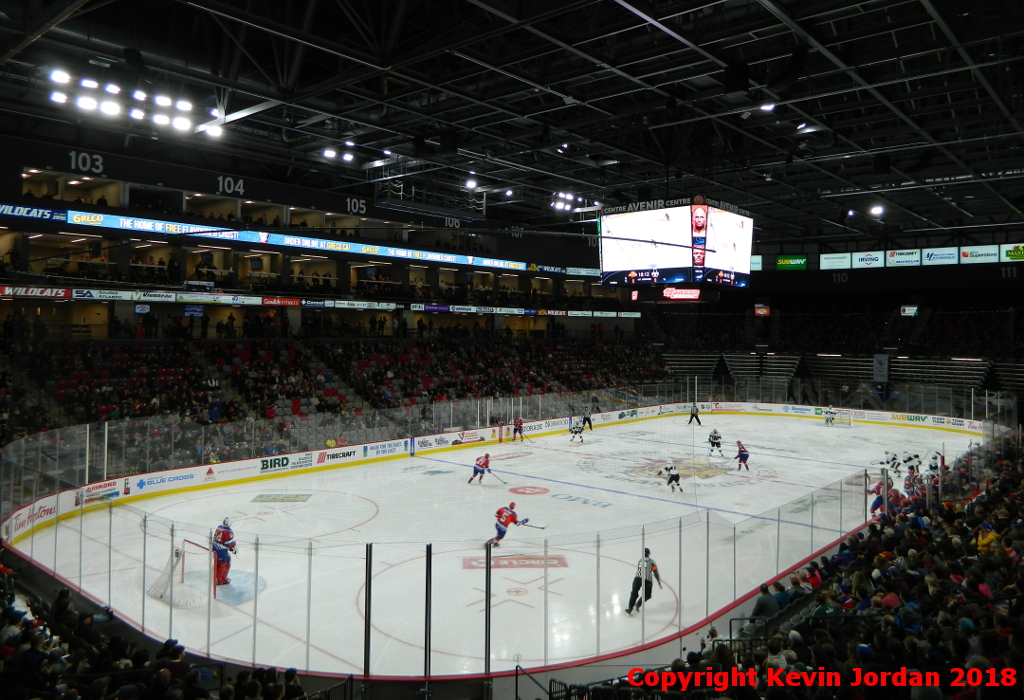 Future Developments
There are no plans to renovate or replace Avenir Centre.


Franchise History
With the Halifax Mooseheads being an overnight success story for the QMJHL, the league in 1995 was eager to move into other former AHL markets in the Maritimes. Much like the Mooseheads, the Moncton Alpines were named for a brewery. Unlike the Mooseheads, they were a disaster, and many expected them to fold after only one year of operation. Instead, the team was bought by oil baron Robert K. Irving, who built them into one of the powerhouses of the league. The team was renamed to the Wildcats for the 1996-97 season, as Irving wanted to give his team a fresh start and distance it from the disastrous first year. The Wildcats played at the venerable Moncton Coliseum until the 2018-19 season, at which point they moved downtown to the new Avenir Centre. 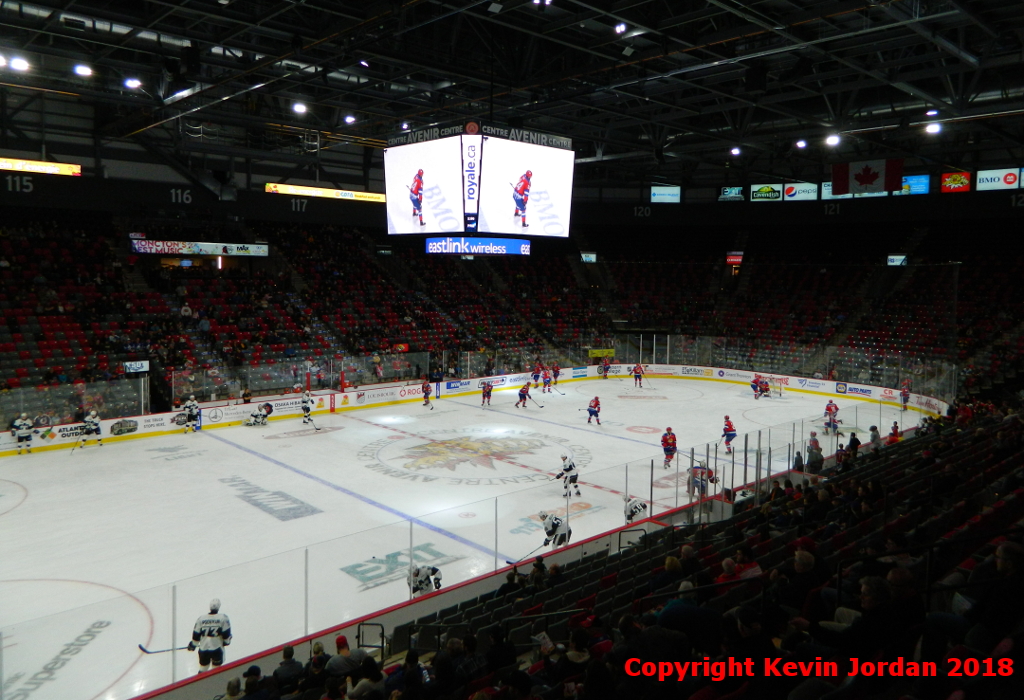