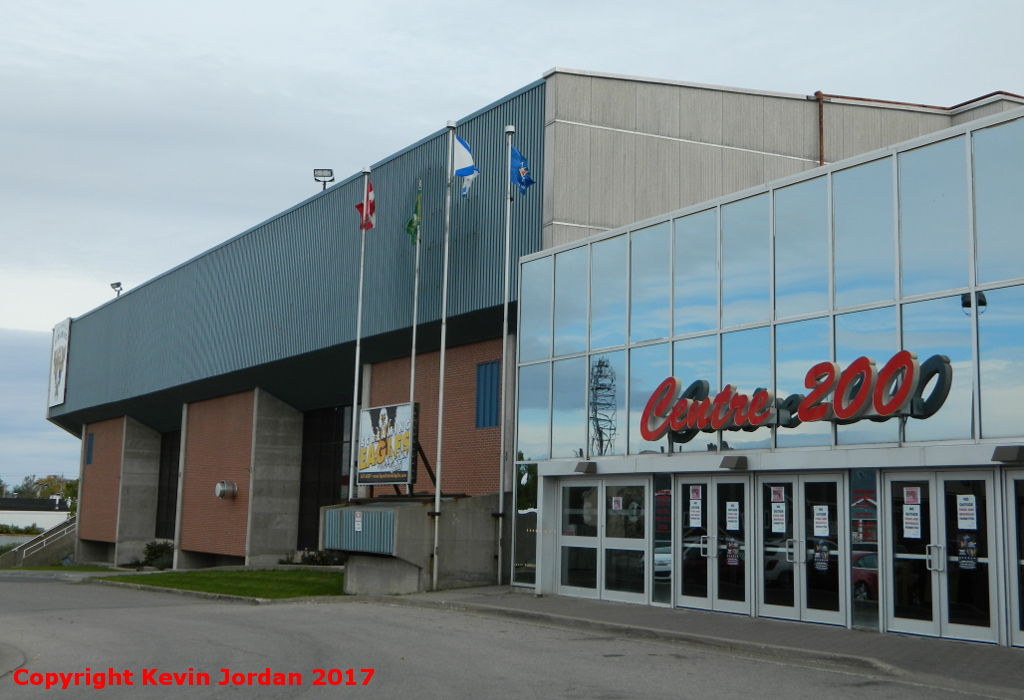 One of the great pleasures of touring around the Quebec Major Junior Hockey League is the fact that its member clubs run the gamut from Native-accented mining towns like Val-d'Or to the epicentre of Quebecois nationalism in Chicoutimi, and from cheerfully bilingual Maritime outposts like Bathurst to the heart of major cities like Quebec City and Halifax. But even in a league of unique experiences and cities with nothing at all in common apart from competing against each other in hockey, Cape Breton stands alone. As English-speaking as southern Ontario or Alberta and set against a gorgeous backdrop of mountains, lakes and seashore, Cape Breton lends a unique cultural perspective to the Q.

The Cape Breton Regional Municipality consists of all of the cities and towns clustered around Sydney Harbour, from Glace Bay in the northeast to Sydney Mines in the northwest. It's a good hour's drive by car, but its heart is Sydney, a depressed post-industrial city that reminded me of a Maritime version of Sault Ste. Marie. In the heart of downtown, located behind a Tim Hortons franchise and attached to the city's casino, lies Centre 200. The arena itself is a concrete, red brick, and blue aluminum siding-clad building that's not exactly attractive. It was built in 1987 and looks it - from the outside it has a late modernist feel, from the era just before architecture rediscovered ornamentation. The casino, attached to the arena, also doesn't quite fit - it's a glitzy-feeling building covered in mirrored glass. It opened in 1995, and one can tell by the fact that it doesn't really "go" that it wasn't part of the original design of the arena. A huge Eagles logo is mounted on the roof of the arena, which is the only thing about it that screams that it's a hockey rink.

I would wager that there's more visitors to Centre 200 on non-gamedays than any other rink in the CHL, given the adjacent casino, so it was very surprising to me to discover that there's no team store on site. I dropped by the morning of the game I attended intending to buy my usual team puck from new rinks I visit, and found there was no way to buy Eagles gear apart from attending a game. It strikes me that the team's leaving money on the table by doing that, but perhaps it's too much of a gamble for team ownership. Regardless, it's odd.

At any rate, Centre 200 on the inside is laid out comparably to the Moncton Coliseum, with a single top concourse above the ring of seats and then a large second deck on the one side of the building. In the one end, the seats dip down to accommodate a surprisingly close back wall of the rink. Nearly all of the concessions and souvenir stands are located in a large open area behind one of the goals, and the architecture there doesn't quite fit the rest of the building - I suspect it was built during the casino expansion, as it has a bit of a casino feel to it, all false ornamentation and glitz. There's a second group of concessions under the second deck, but at the game I attended it felt empty most of the game, with most fans seeming to congregate in the big casino-style lobby instead.

Unlike in Moncton, in Cape Breton the best seats are in the lower bowl. From the lower bowl you could be in any junior building built in the last 35 years, in a good way - the views are solidly good and the seats are the same molded plastic you'd get anywhere. In the upper level, on the other hand, whereas Moncton angled its roof trusses to allow for unobstructed views from the entire top deck, in Sydney, if you're sitting higher than about partway up the upper level, you'll spend the game looking through roof trusses at the scoreboard. It's not exactly an obstructed view on a par with Halifax, but it seemed odd to me that the building was designed that way.

I briefly looked around Centre 200 in 2006 when I was in town, but when I finally attended a game in 2017, a few things had changed. Once upon a time, on the "low" side of the ice, there was a press box above the seats, but in the meantime they've added a private suite level running that entire side of the ice. The old press box has been displaced and is how high up in the rafters, looking down on the ice through a maze of steel.

There really isn't a lot of history on display in Centre 200. Two banners hang in the rafters; one honouring the Cape Breton Oilers team that won the Calder Cup in 1993, the other retirng the number 29 of Marc-André Fleury. Oddly, the Eagles' one division championship banner does not hang in the rafters with the others, but instead is mounted on the back wall of the building, low enough that anyone could touch it. Apart from that, there's basically no team history on display, no team colours on the walls, or anything else that would give the building a bit of local flavour.

Game presentation is - and I mean this in the best possible way - twenty years out of date. The mascot slinks in the background, not really calling attention to himself. Music volume is subdued to levels that you can easily chat with your friends, and a lot of Highland music and sea shanties are played along with the usual jock jams. The videoboard is used to decent effect when called upon, but doesn't try to make itself the centre of attention. They played "In the Air Tonight" as part of the team intro, because irony. The only thing that truly stands out as ultramodern is the Eagles' goal celebrations, which apparently are new for 2017. The old halogen bulbs in the arena have been replaced with LED, and when the team scores, they go kind of apeshit, flashing on and off in patterns and at random. I've never seen anything like it, not even at the NHL level, and while I can't say I loved it, it's at least less intrusive than the enormous foghorn in Charlottetown.

To the best of my recollection, there are only three cities in the Q where French doesn't really make an appearance - Charlottetown, Halifax, and Cape Breton. Of those three, Cape Breton felt the most unlike attending a Q game. There's a certain downhome hospitality and friendliness in the crowd, and the atmosphere is subdued in comparison to the raucous party atmosphere one finds in Quebec. But in comparison to the NHL-in-miniature feeling in Halifax, or the "still the worst CHL building I've been to" architectural disaster in Charlottetown, Cape Breton is the same kind of small city feeling that the CHL thrives on. The building is nothing special, but between the Gaelic music, the friendliness, and the bare-bones, "not trying to be anything it isn't" arena, I loved it in Cape Breton. The unpretentiousness of a hockey game presented simply, in a welcoming atmosphere, left a big impression on me, and I'd happily keep going back again and again anytime I'm in the area. 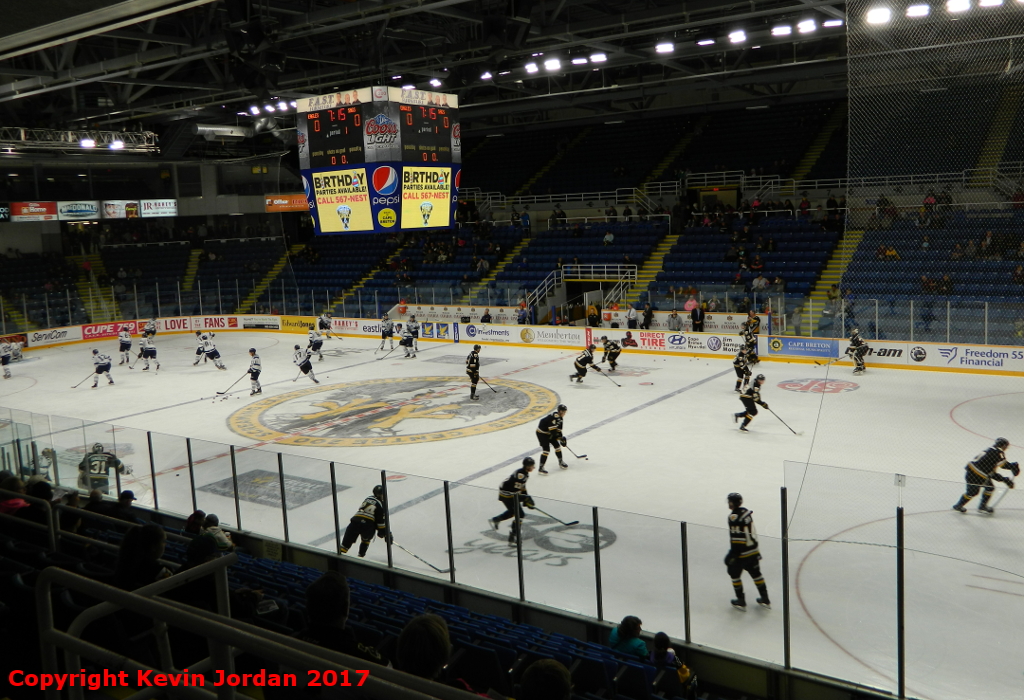 Future Developments
There are no plans to renovate or replace Centre 200.


Franchise History
Dating back to the QMJHL's founding in 1969, the Eagles began life on the south shore of the St. Lawrence River as the Sorel Éperviers, or Blackhawks, playing out of the Colisée Cardin. They spent the next decade in Sorel-Tracy, played a couple years as an essentially nomadic team moving back and forth between Sorel and Verdun, and wound up in Granby in 1981 to become the Bisons, playing at the Arena Leonard Grondin. The team never knew much success in Sorel, Verdun, or Granby, until 1996, when the newly-renamed Prédateurs won the QMJHL and Memorial Cup. However, attendance in Granby was low, and the team moved away the following season, becoming the Screaming Eagles in 1997. The team finally stopped screaming in 2019. 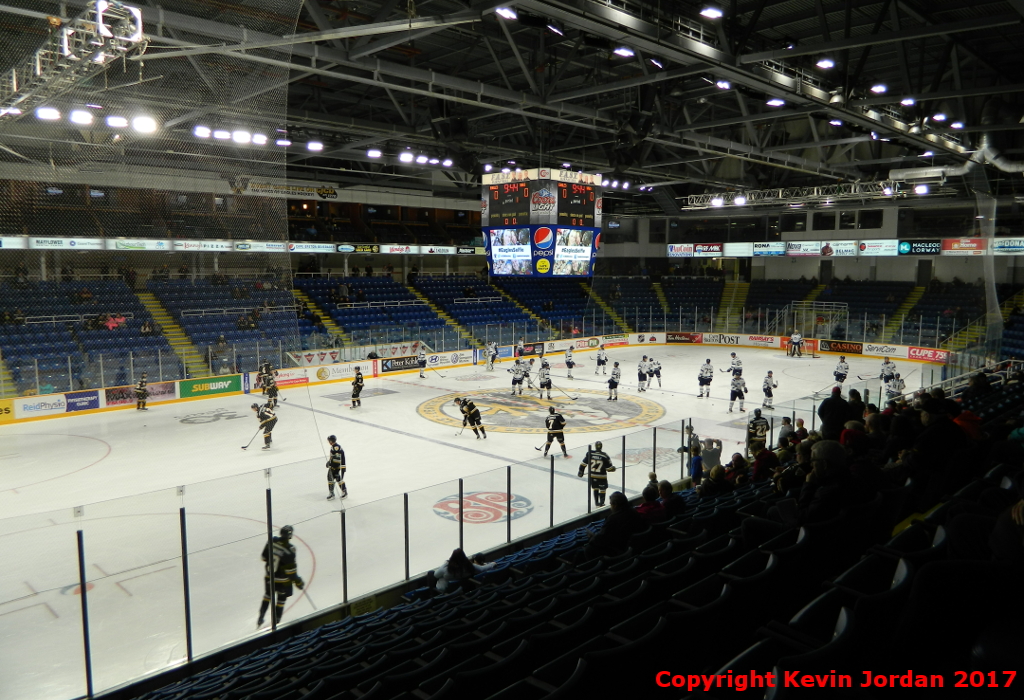