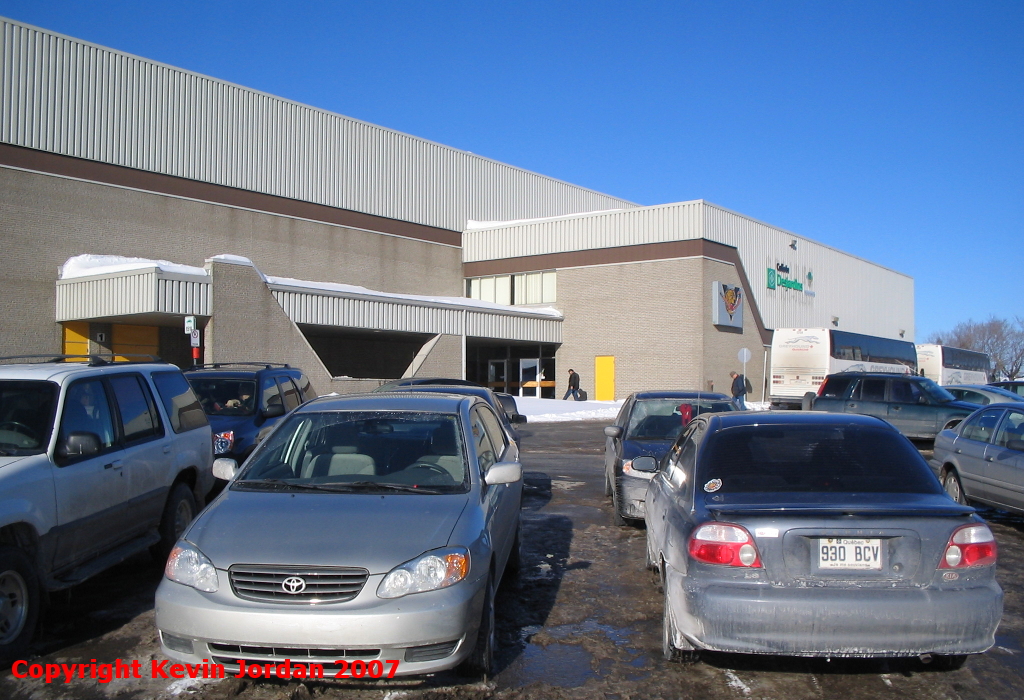 The Colisée Desjardins is only the most recent, newly corporate name for the eponymous small, out of the way arena in a small, out of the way city in Québec. The Colisée was originally known as the Colisée des Bois-Francs, a name that translates as the "Hardwood Coliseum" (the Bois-Francs, or Hardwood, region is the area of Québec where Victoriaville is located). However, the Colisée name really refers to the whole sports complex including the attached community meeting rooms; the hockey arena proper is still known as the Amphitheatre Gilbert-Perreault, after the hometown Hockey Hall of Famer and Buffalo Sabre legend. By whatever name, it is one of the CHL's smallest full-time arenas, and is located on the fringes of Victoriaville's compact downtown, across the street from a shopping mall. If entering town by the main drag, the boulevard des Bois-Francs, you almost might miss the arena as it is located just off the main road behind some other buildings, and is small enough to look like a small warehouse or factory instead of an arena.

When you get up closer, the only hints of the building's true function is the small Tigres logo on the side of the arena. A small, green sign announces the building's name, but it is possible to see the outline of the old Bois-Francs name still visible on the grey aluminum siding that coats the whole of the arena. Tiny doors lead the faithful into a small, low lobby painted in gold and green, with a few ticket booths and meeting rooms off to the side, and not much else. Stairs lead up into the heart of the arena, and Gilbert Perreault's HHOF induction sweater greets visitors on the way in.

Once inside the seating area, it's still just as small as it looked on the outside. Six rows of seats extend around the arena, all wooden. The bottom four rows are orange while the top two are brown. Along one side of the arena is a small "upper deck" that consists of three more rows of seats, all a bright lime green. Standing room also extends around three sides of the bowl; the upper deck side has no SRO because they would block the view from above. The small size of the building means that all views are good, and the seats are decently comfortable by wood standards. Private boxes and the press box run down one side of the ice above the seating area, and then also in the two opposite corners, flanking the upper deck. They are obviously additions to the original design; most look new. In one corner of the building is the small team store - the "Boutigre" - which immediately slotted in at number one on my list of "best team store names". Pictures of Victoriaville hockey history dot the concourse, reminding you that the current Tigres are only the most recent Victo-based team to bear the nickname. Meanwhile, the team's banners hang on one side of the ice, bearing the names of the retired numbers as well as native Victoriavillians to play in the NHL, including legends like the aforementioned Gilbert Perreault and also Jean Beliveau, who was born in Victo but grew up in Trois-Rivières.

During the game, you quickly find that Victoriaville's noise is out of this world. There is a guy in section 17 who has nine 18-wheeler truck air horns hooked up to a tank of compressed air, and he seems to have a different horn for every occasion. The crowd is loud too, as is the music, which is mostly rave music and dance remixes of popular tunes. The scoreboard is old but still works adequately. Concessions line up quickly but there are a decent number of them to handle the crowds. The washrooms are pathetically small - four tiny lavatories handle the entire building. You can also go downstairs to the lobby for washrooms, but this is really only an option during intermissions, as doing so during play would cause you to miss too much of the action. At least with the washrooms in the concourse you can see the game while in line. As with most small towns, fans are welcoming. Most were interested in my Fog Devils jersey and wondering just what a guy in a St. John's sweater and a girl in a Knights sweater were doing at a Tigres-Olympiques game! Most people don't have much English, but the charm and interest of the fans transcends the language barrier and makes communication possible.

I left Victoriaville with a smile and a headache. The constant blaring of the airhorns can get to be a bit much, and those with sensitive ears would do well to bring a pair of earplugs. However, the charm of the fans more than made up for it, and a Toby LaFrance goal with 3.3 seconds remaining that broke a tie and sealed the game for the Tigres nearly brought the house down. Victoriaville was my third QMJHL game in the province of Québec, but it was the first one where I truly felt welcomed by the fans. For a mostly English-speaking person with the ability to read signs, ask directions and order food but not to actually carry on a conversation in French, attending games in Québec can be a little daunting. However, for the first time in attending games there, I felt like I was a welcome guest in Victo, and the combination of that and the small, boisterous arena made an afternoon at the Colisée a pleasure. 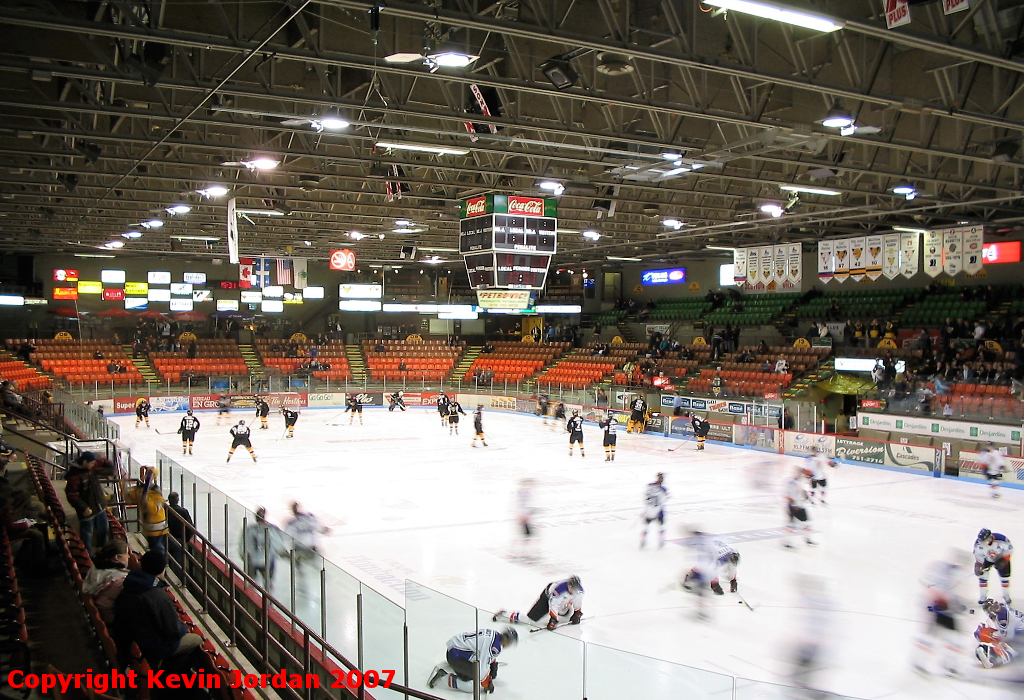 Future Developments
There are no plans to renovate or replace the Colisée Desjardins.


Franchise History
The Tigres franchise was founded in 1982-83 in Longueuil as the Chevaliers, playing out of the Colisée Jean Beliveau. They never drew well in Longueuil, though, and moved down Autoroute 20 in 1987 to become the Tigres.