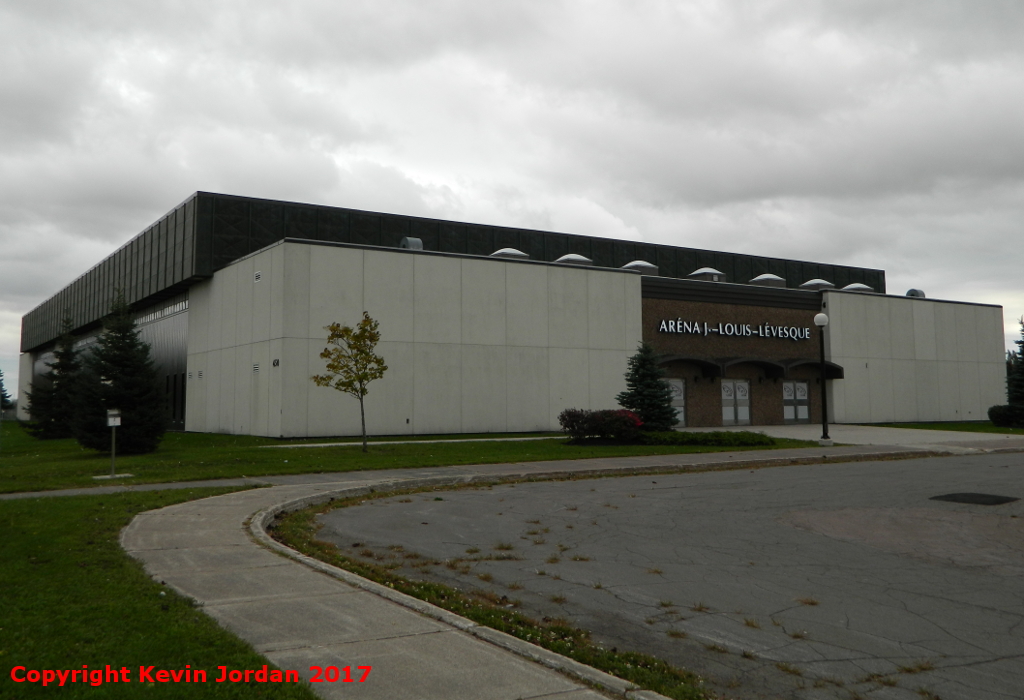 The City of Moncton constructed a new downtown arena for the Wildcats in 2018, and thank goodness they did, because few teams have such a history of being evicted from their home for disparate reasons as the Wildcats did from the Coliseum. Even in my own personal history I have the story of missing a Wildcats game in 2006 because of an RV show, but it's extended much farther than that. On occasion, the Wildcats haven't been able to rearrange their schedule to work around Sha Na Na or Youth for Christ or a plaster and drywall expo, and were forced to seek other accommodations.

In 2009, the World Curling Championships were held in Moncton, and with the Coliseum booked solid for three straight weeks, the Wildcats were forced to move in with the Université de Moncton Aigles Bleus and play three games at the J-Louis Levesque Arena, located on the university campus. The building itself is unremarkable; located on the fringes of the campus next to the highway and easily visible to passing traffic. It has the unmistakeable mid-sixties form-follows-function design and is clad in neutral colours, with only the main entrance having any ornamentation; a small sign identifying the building over three main entry doors. The building is surrounded by parking lots which tend to fill up with cars belonging to commuting students on school days.

The inside of the arena is surprisingly colourful given the drab exterior. Once you pass through the tiny ticket office, the building opens up, with two grandstands running the length of the ice full of blue and gold seats. The ends are empty of seats, though there are indoor seating areas not unlike party suites at either end overlooking the ice surface. The walls are all navy blue and the roof trusses are bright yellow, lending a bright, airy feel to the place.

The major drawback to the arena design are the support pillars - for such a small building constructed after the invention of the cantilevered roof, having so many support columns is inexcusable. I'm told that the columns block the view from the standing room section quite badly, and so fans tend to shoehorn themselves in wherever they please during Aigles Bleus games.

The big surprise, at least from my perspective, is the fact that all of the arena signage is solely in French. Yes, the Université de Moncton is a French-language university, but virtually all of New Brunswick is bilingual, and Moncton in particular has huge English and French populations. One expects in Canada that Quebec will be solely French, while Alberta (for example) would be solely English, but it shocked me to see only French in a public building in New Brunswick.

The Levesque Arena was a stopgap for the Wildcats, and according to recent news, QMJHL rules have changed since 2009 and the arena would no longer be considered for a temporary home, as it's too small to meet current standards. When another eviction forced the Wildcats out of the Coliseum in 2015, they played at the Aitken Centre in Fredericton, a good ninety minute drive away. And of course, one hopes that with the Avenir Centre now open, the Wildcats will have the first right of refusal on home dates like virtually every other team in junior hockey can count on, and temporary homes will become a thing of the past.

What's the Arena Used for Today?
The J.-Louis-Levesque Arena has been the home of the Universite de Moncton Aigles Bleus since the 1960's, and the home of the Odyssee Olympiens high school team since the school opened in 2005. The rest of the day's ice time is filled with public and student pickup hockey and public skating.

Return to Avenir Centre
Return to the Main Menu