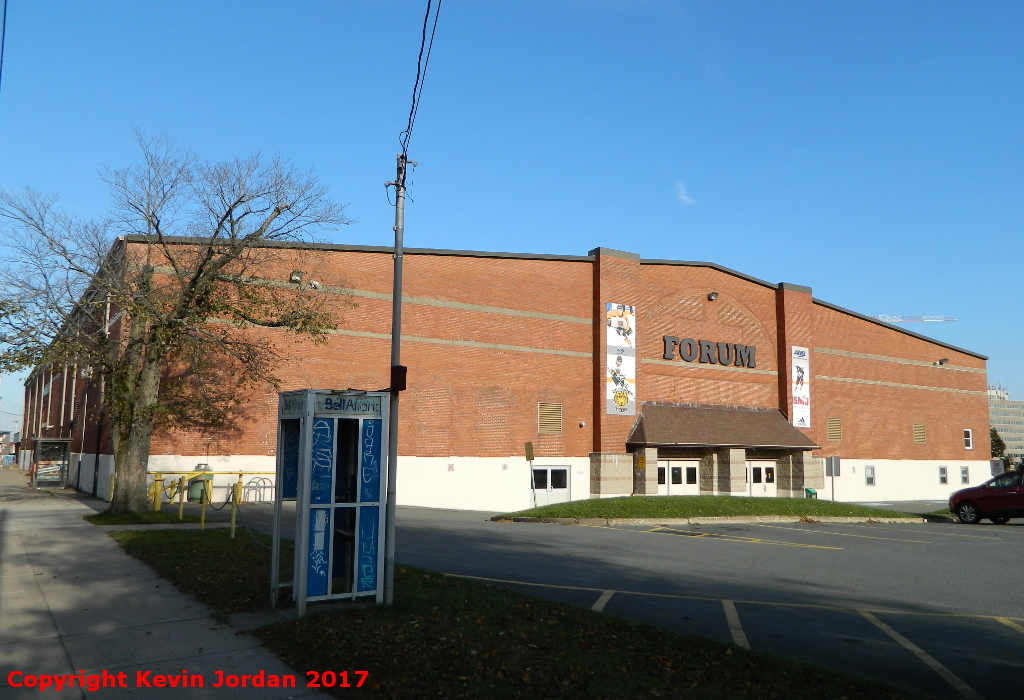 In 2006, I made my first visit to the Halifax Forum. Driving in that morning from Charlottetown by way of Cavendish, Summerside, and a short but nasty snowstorm in the Cobequid Bypass, I hit Halifax about 90 minutes prior to gametime and beelined for the Forum en route to the 4:00 PM Mooseheads-Sea Dogs game at the Metro Centre for which I had a ticket. I found a tall, red-brick arena with a parking lot in front. Every single space was full. Crap. I wound up leaving the rental car illegally parked on the street, took a few outside shots, and then headed for the front door underneath the massive "FORUM" sign.

Once inside, I found a crowded window and door show going on (EXCITEMENT!) and a security guard who indicated that they couldn't just have people seeing windows and doors for free. I mean, obviously. But after a few minutes of haggling and lying about needing a washroom, he seemed to realize that I was a deranged crazy person who wasn't going to just go away, and that letting me into the arena for five minutes was easier than dealing with me. I am not a huge fan of the Halifax Regional Municipality at the best of times (suggested slogan: Experience our Concrete!), so thank God I was allowed in - I won't have to go back anytime soon. I raced inside, took a few pictures, and left.

Eleven years later, I finally went back and got to experience the Forum properly. The city of Halifax, in the interim, had debated tearing the building down, but ultimately decided to save it, and thank goodness they did. While I've been in older hockey arenas than the Forum, including the Galt Arena Gardens, Windsor Arena, and Matthews Arena in Boston, the Forum has a certain je ne sais quoi about it, owing largely to the fact that it hasn't really been altered since 1927. The seats are all originals; wooden chairs painted grey apart from the last few rows, where there are just black wooden benches to sit on. Fat support columns hold the roof up, which must suck for actually having to watch a game there, but I speak as something of a nerdy arena authority to say I've never seen it in person anywhere else. The arena is full of sloping floors and odd steps that wouldn't pass a OHSA inspection today, cracked plasterwork covered in dozens of layers of paint, and Bauhaus-style windows at the back of each of the sides of the building, flooding the place with natural light on gamedays.

The seating bowl is laid out in a U shape, with a blank wall at the end covered in the logos of St Marys and Dalhousie Universities. Press gondolas overhang the ice on either side of the ice surface. The concourse underneath is narrow and painted in a peach colour with white and black. The roof is dark wood. The seating level starts well above ice level, giving every seat in the house a viewpoint looking down on the ice instead of out at it. Apart from that, the building's construction is simple, with only a small lobby and ticket office in the front looking out on the parking lot adding to the barebones nature of the rink.

It can probably be surmised that I'm the kind of person who appreciates old things; I own an old house myself that's about the age of the Forum, and I love seeing all of the original features still present in the building. While Windsor Arena was a cramped dump by the time it closed and the soul of Galt Arena Gardens was destroyed in the 1990's renovation done there, the Forum is still the beating heart of pre-war hockey in Canada. I am so glad the city of Halifax saved it, and I implore anyone (dozens of you?) who care about these things the way I do to stop in next time you're in the area. 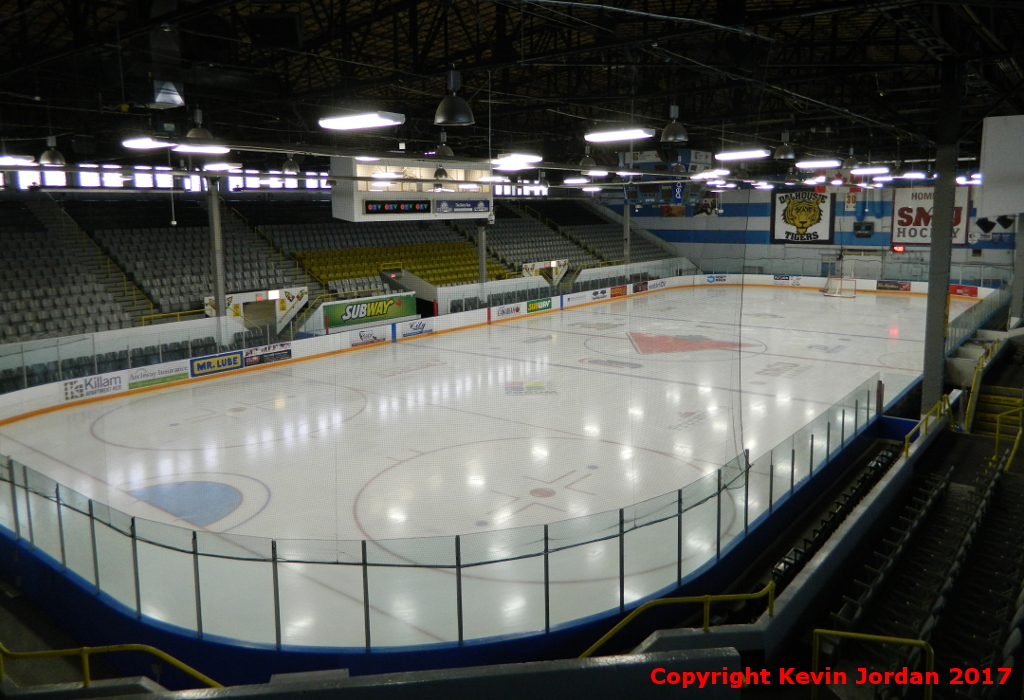 What's the Arena Used for Today?
The Forum today hosts hockey, trade shows, concerts, and pretty much anything else you can think of that might go on in an arena. With the Metro Centre being pretty huge, the Forum hosts most everything that wouldn't come close to selling it out. The major hockey tenants today are the CIS's St. Mary's University Huskies and Dalhousie Tigers. The Mooseheads, for their part, generally play preseason games here every year, and occasionally play midweek first-round playoff games at the Forum when they're not expecting to sell enough tickets to justify paying the rent downtown. 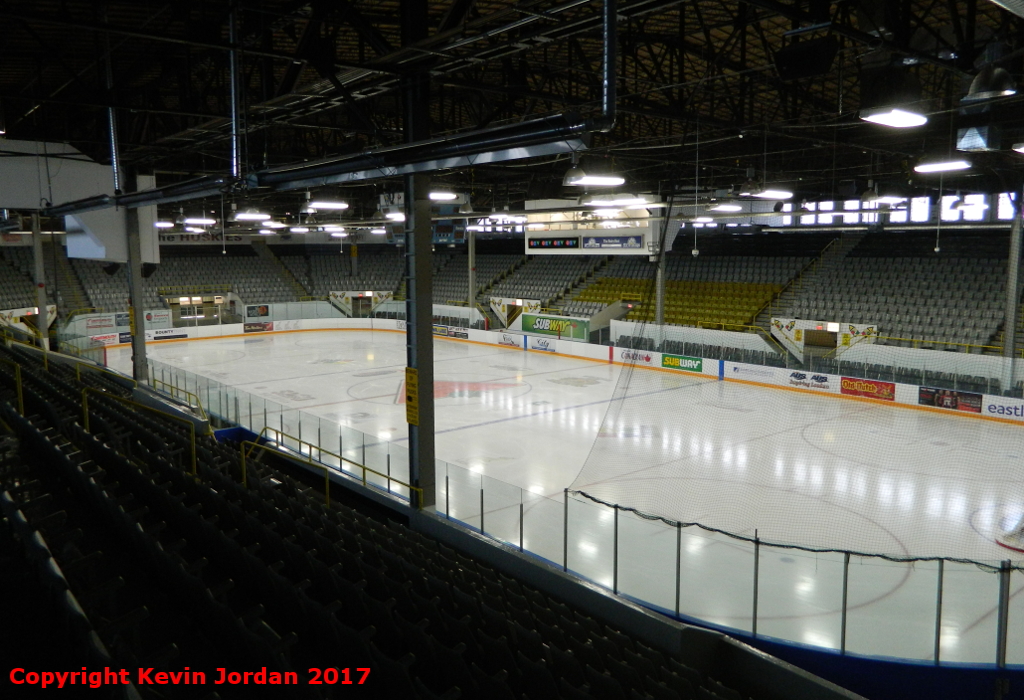 Return to Scotiabank Centre
Return to the Main Menu