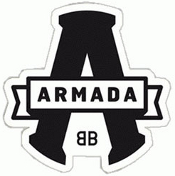 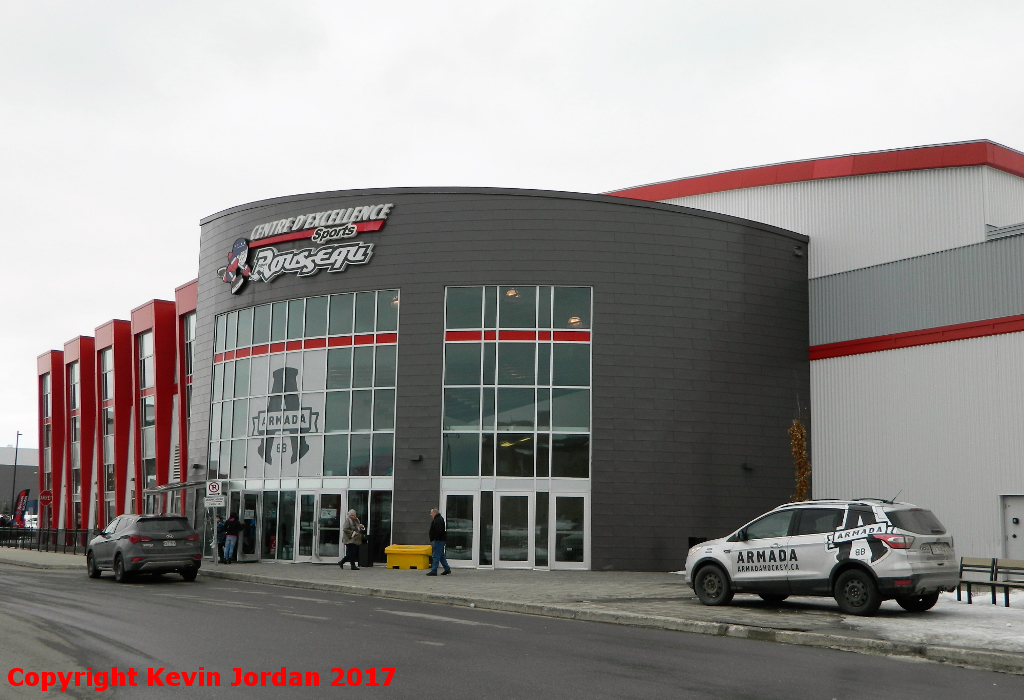 A lot of cities these days are building elaborate multi-pad arena complexes to meet rising demand for ice time. You know what every single one looks like on the inside, even if you've never been to that specific one - one larger ice pad with a bit of seating, a bunch more with just ice, a cafe, a pro shop, a lot of bright lighting and neutral paint. I was just describing London's Western Fair Sports Centre there, but it could also have described any similar place in any city in Canada. That sameness is not necessarily a bad thing. Municipal infrastructure these days falls into two categories: elaborate showpieces, and functional, unsexy buildings which exist only to fulfill a need at the lowest cost. And while most new CHL arenas fall into the "showpiece" category, the Centre d'Excellence Sports Rousseau in Boisbriand bucks the trend, as a reasonably nice, functional hockey rink that isn't trying to be a basketball arena, a concert hall, or a convention centre.

Blainville and Boisbriand are two adjacent suburban communities on the mainland north of the Islands of Jesus (Laval) and Montreal. I'm not entirely certain why the Armada adopted a hyphenated team name - the arena is in Boisbriand, and if you're going to use two cities, why not three or four? Why not the Blainville-Boisbriand-St-Thérèse-St-Eustache Armada, or use the regional municipality name and call them the Thérèse-de-Blainville Armada? But regardless of the name, the arena is located in a quiet suburban area between housing and light industry, adjacent to the Autoroute and just north of a large retail power centre. It is a bright red and white aluminum-clad building that doesn't particularly stand out from the adjacent warehouses.

When you enter the main door, the arena doesn't appear any different from any other community rink in Canada - there's the same split between the different ice pads, the same small cafe, the same tiny ticket windows. The team sets up a store in the front lobby of the arena, and it seems odd they aren't given their own space somewhere, but I was impressed with how inexpensive team gear was. In addition to the usual arena stuff, there's also an outlet of Sports Rousseau (a sort of Quebec version of Perani's Hockey World that sponsors the building) on site, as well as a dry land training facility with a well-stocked gym.

Once you obtain your tickets, you pass through the cafe/sports bar area, well-stocked with beer and big screen TV's, to enter the arena bowl proper. Tickets are taken and you enter into a modern version of a community barn. The entrance is down in the corner at ice level, but the only concourse runs around the top of the seating, so every single ticketholder entering through the main entrance needs to walk up the stairs along the aisle to get into the concourse. Obviously there is an elevator behind the scenes for the handicapped along with a back staircase, but it still seems like quite a design flaw!

The seating bowl is horseshoe-shaped, with blue seats along the sides and red in the ends, with the first few rows around the building being silver. Suites hang above the seating on one side of the arena, along with a small press box. The ceiling is low and flat and the walls are aluminum, and apart from the fact it's so well-lit, you could easily be in another, much older community barn like that in Owen Sound. In the fourth end, there is what appears to be a party suite and windows that open out from the sports bar/cafe near the entrance. The setup is reminiscent of the Powerade Centre in Brampton, or the renovated Erie Insurance Arena.

If I'm making it sound so far like I haven't liked the Rousseau Centre (can I call it that? Let's say I can call it that), then I apologize. In a CHL that has replaced dozens of old barns in the past few decades with identikit sports and entertainment clones, it was absolutely refreshing to walk into a new arena that was clearly built for community use, on a budget, and not trying to impress anyone. The Armada's home is unflashy and unspectacular, but all of the seats and sightlines are good and I'm sure taxpayers in the north shore region appreciate their lower bills over having a tyrannovision scoreboard and marble floors in the lobby.

Once the game began, the Rousseau Centre continued to impress. The centre scoreclock doesn't have a videoboard, which is almost unheard of in a new building, but there is a projection screen on the wall end of the building, and two televisions in the far end for use of those whose view of the projection screen is obstructed by the centre scoreboard. The Armada use it well, with a professional-quality graphics package, and my only complaint was that the music was a little too loud for my taste. The Armada have a kickass goal song too, an original compostion called Embarque dans l'Armada done in the rolling style of a punky sea shanty, sort of reminiscent of a lost Dropkick Murphys French B-side. In a world where team songs range from embarrassing to cutesy to ironically so bad it's good, the Armada having an actually cool original goal song is unexpectedly awesome. They also really embrace being the only monotone black-and-white team in the CHL - all of the ushers wear referee jerseys!

I had been wondering how the suburban crowd would be in terms of enthusiasm, but once the game began, while the place wasn't full, the atmosphere was pretty good. The building's hard surfaces reflect noise, and while I was mildly annoyed with the promotions announcer's obnoxious yelping, the crowd noise levels were still respectable. Mississauga, this isn't. The building's peripherals are relatively spartan. There's only tiny beer concessions in the arena bowl itself - the food concessions are located outside in the cafe - and there's only one male and one female washroom for the entire bowl, though at least they're huge.

Overall, the Rousseau Centre is kind of a hybrid of a lot of trends in the CHL. The suburban location and new building call to mind virtually identical new buildings from Sarnia to Kent, Washington, but the community barn spirit (and cheapness) shine through as a throwback to a simpler time. Most cities these days, when building sprawling multi-ice centres, build for inexpensiveness and functionality. Boisbriand added a few more seats to theirs and attracted a QMJHL team, and the experience there is all the better for it - a brand new arena with the feel of an old community barn, built in the days before luxury suites, in-seat concession service and $25 tickets. It is sincerely hoped that the Armada - my old St. John's Fog Devils - are able to stay put and thrive in their third home in the long term. 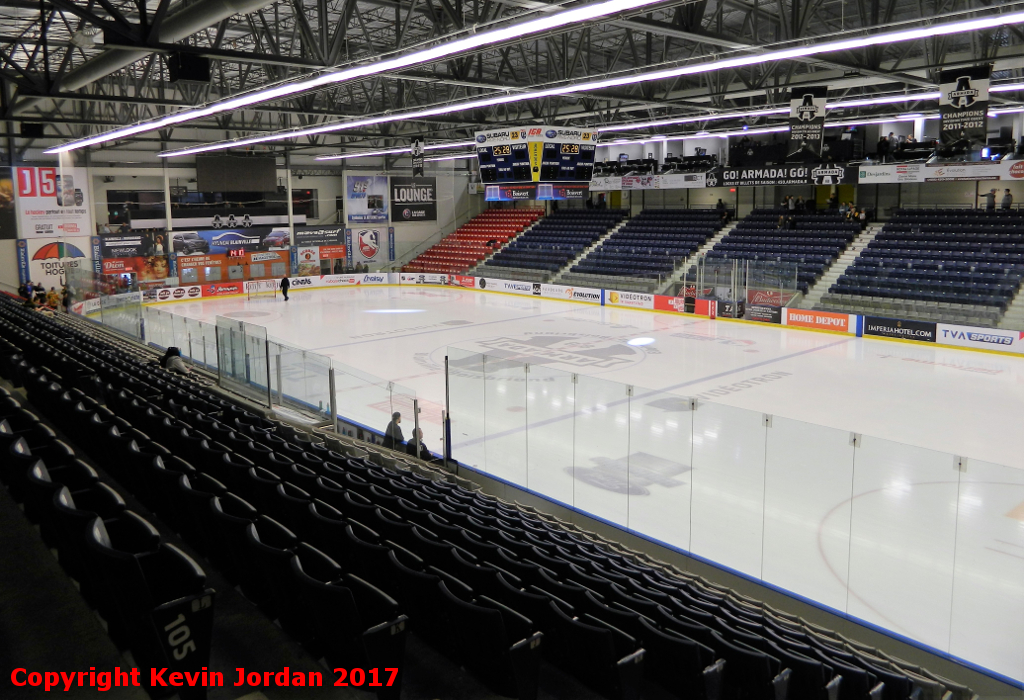 Future Developments
There are no plans to renovate or replace the Centre d'Éxcellence Sports Rousseau.

Franchise History
The Montreal Juniors were apparently relatively happy in Verdun, but the city of Boisbriand made the team an offer they couldn't refuse, so to speak, to move into their new arena. The Juniors thus decamped for the start of the 2011-12 season from the Island of Montreal to the far northern suburbs, in the foothills of the Laurentians. The franchise began in 2005 as my beloved St. John's Fog Devils. 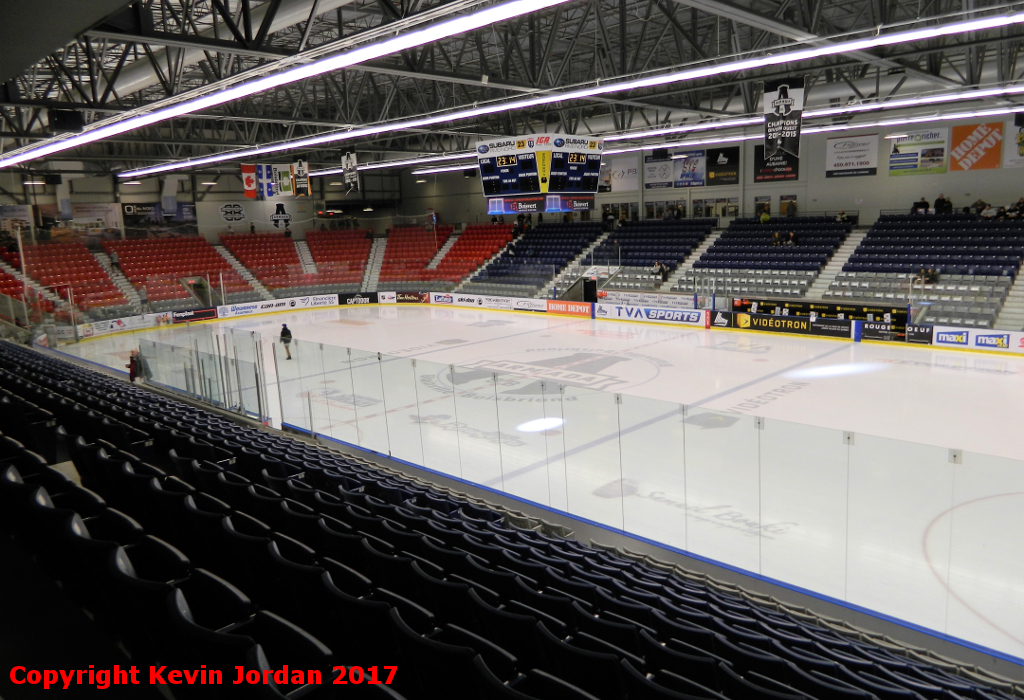